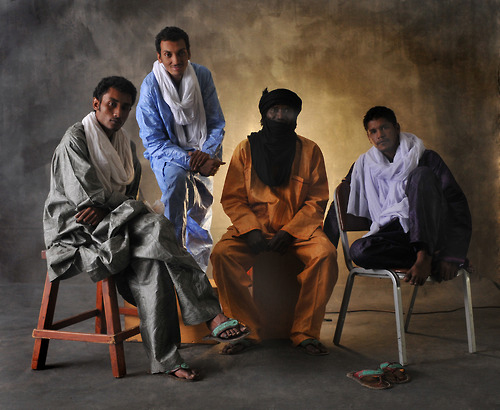 Tuareg guitarist and singer Omara “Bombino” Moctar made his Nonesuch Records debut with the release of Nomad on April 2, 2013. The album was recorded with 2013 Grammy Award-winning Producer of the Year Dan Auerbach of The Black Keys at his Nashville studio, Easy Eye Sound.

“A perfect match of sound and soul [that] introduces a new guitar hero.” Rolling Stone.

Bombino is a member of the Tuareg Ifoghas tribe, a nomadic people descended from the Berbers of North Africa; for centuries they have fought against colonialism and the imposition of strict Islamic rule. During his lifetime, the Tuareg people have fought the Niger government to secure their rights on numerous occasions, causing Bombino and his family to flee several times.

While living in Algeria and Libya in his teen years, Bombino’s friends played him videos of Jimi Hendrix and Mark Knopfler, among others, which they watched over and over in an effort to master their licks. Bombino worked regularly as a musician and also as a herder in the desert near Tripoli, spending many hours alone watching the animals and practicing his guitar.

He recalls the time he’s spent in the desert and those he has left behind during the upheavals that repeatedly sent him and his family into exile. It’s through the sound of his work, at least initially, that Bombino communicates with listeners outside his homeland. His simple but evocative lyrics are sung in the Tamasheck language of the Tuareg people of Niger.

In 2009, Bombino met filmmaker Ron Wyman, who had heard a cassette of Bombino’s music while traveling near Agadez. Wyman was enchanted by Bombino’s music and spent a year seeking him out, eventually tracking him down to Ouagadougou, Burkina Faso, where he was in exile after two band members were killed in a rebellion (The Tuaregs have since put down their arms and returned to Niger). At the end of the war, Bombino returned to Agadez with Wyman and staged a concert to celebrate the newfound peace that established Bombino as a hero of the Tuareg people.

When those guys get in front of you and Bombino is playing electric guitar, you don’t have to be in the desert. They will transform wherever they are. That’s what’s amazing about Bombino.” Dan Auerbach

Since the release of “Nomad” Bombino has been in hot demand on stages and festivals around the world. We now welcome him to his debut tour of Australia: