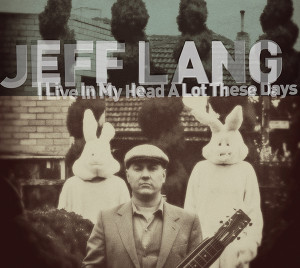 Australian-based musician Jeff Lang has earned worldwide acclaim as a virtuosic guitarist, a dynamic songwriter and a startlingly unique live performer. With a back catalogue of 14 studio albums, Jeff has been feature at major festivals, pubs, clubs, arts centres and venues internationally for the past decade. Blending rock, roots, folk, blues, ballads, instrumentals, improvisation and a devastatingly high level of musicality, Jeff Lang is a singularly unique performer in our world.

Jeff Lang’s newest record, “I Live In My Head A Lot These Days” will be released in Australia via ABC/Universal on May 16th 2014.

Throughout his career, Jeff has won numerous awards – the most outstanding would be his three ARIA award wins in 2002, 2010 and 2012 in addition to a further seven nominations. Just last week, Jeff was listed in News Ltd ‘Australia’s Best Guitarist’ poll, which was media and peer voted and his last album, “Carried In Mind” (ABC/UNIVERSAL) won the 2012 ARIA award for “Best Blues & Roots”, was awarded “Album of The Year” by Australia’s roots music bible, Rhythms and won the ‘National Folk Recording Award’ presented by Australia’s National Film and Sound Archives.  Always one to experiment with genres and instrumentation, Jeff’s world music project Djan Djan won the 2010 ARIA for “Best World Release”.

Over the years, Lang has built up a devoted, almost cult-like following with his live performances. Working without a set list and allowing the unique energy of each night to shape the songs, Lang’s live shows have become much talked about, always taking the audience along for the ride, has seen word of mouth bloom into a successful career.

It’s been widely acknowledged that Jeff Lang is an extraordinarily individual musician. What enhances his unique nature is his steadfast adherence to a prolific and diverse musical palette and output. A songwriter, a collaborator, a guitar virtuoso and a stunning lyricist, Jeff Lang crafts songs as novellas – rich with depth and vision, yet with an open breathe for individual interpretation.

And the media says…

“In a world where music is diluted by money and plasticine, give thanks that Jeff Lang is out there… He paints pictures in sound.” Beat Magazine

“Jeff Lang is one of those people who has music dripping from his fingers.”
Courier Mail –  Brisbane, Australia

“He explores sonorities as eclectic as they are stunning…Lang’s only reference point is himself, a unique singer-songwriter-guitarist who follows his own path.”
Le Soleil –  Quebec, Canada

“Jeff Lang is, in my humble opinion, a national treasure, a truly gifted songwriter and an outstanding guitarist. He has been inspiration to countless Australian and internationally renowned roots artists and surely has a place in history as one of this generation’s finest.
He has really touched me and musically, I had a kind of revelation…”
John Butler, John Butler Trio