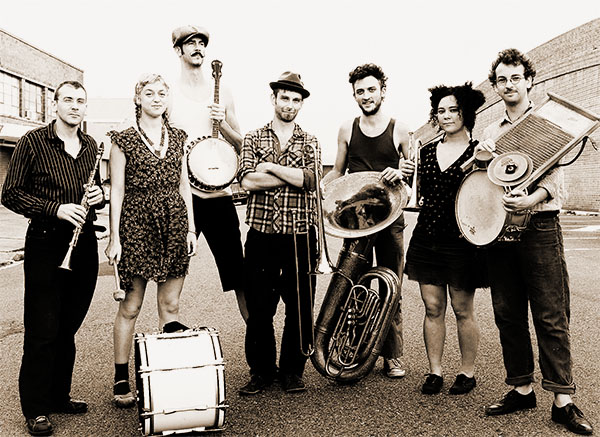 Return for their FOURTH Australian tour with two new albums for sale at shows: “Pyramid Strut”, recorded in Tasmania by Chris Townend on their last tour and their new album “Owl Call Blues”. Book fast, their last tour was FULLY sold out.

The members of Tuba Skinny migrated to New Orleans independently of each other, all with the desire to play music.  They met on the streets and began busking together then travelling around the United States, riding freight trains and making music wherever they would go, originally as the “Dead Man Street Orchestra”. While on tour, hurricane Katrina struck New Orleans. Though the city was left devastated and flooded, most of them knew, without a doubt, that this was the place that they would call home.

In 2009 Tuba Skinny was consolidated. The band played in the streets concentrating their music to the roots of jazz and the blues of the south. Visitors and locals alike would come to the French Quarter and watch them play, and they grew their crowd. Not long after their conception they decided to fly to Europe, where they built bikes and rode through the French countryside drinking wine and stopping to play on sidewalks, in town squares, around campfires and at the beach. It was during this trip that they played a very a good rendition of Bessie Smith’s “St. Louis Blues” on the street at the request of a festival programmer and we’re subsequently invited to return the following summer to play at The Festival de Jazz in Vitoria-Gastiez, Spain.

Since this initial European trip, the group have continually been invited and re-invited to major European, Australian, Canadian and USA festivals. They have seen the growth of their audience from word of mouth, the international swing dance community, uploaded youtube videos (most infamously via Boing Boing) and their barnstormin’, dance driven live shows.

“If Woody Allen ever runs out of scratchy old records to use in his films, he might well turn to Tuba Skinny to provide a new take on traditional jazz and blues.” Roll Magazine (USA)

“The music is magical, you get the feeling that Tuba Skinny isn’t just recreating this music, but has somehow been transported in time from the roaring twenties to the streets of today.” (The Daily Freeman).

Writing an essay is a task that can be solved by placing an order for Write On Deadline. You will receive offers from different professional essay writers and will be able to choose the most advantageous in terms of price and deadline. Ordering an essay is more profitable than searching for ready-made essays in abstract databases, because the author of your choice will do an individual work based on your requirements. Downloading an essay from the base of finished works means getting a non-unique work.