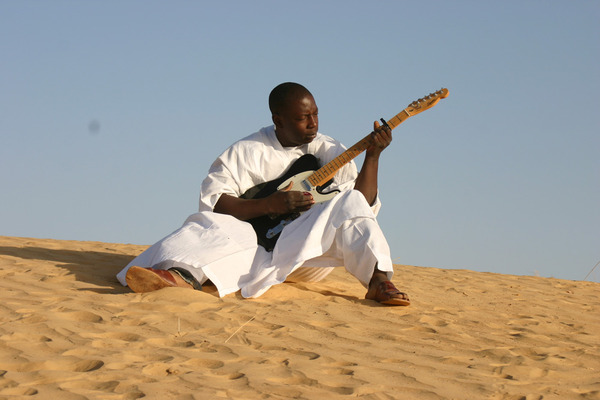 “The Hendrix of the Sahara…” All Music Guide

“Mali has a new guitar God, and his name is Vieux Farka Toure” – FADER

Vieux Farka Toure was born in Niafunké, Mali in 1981. He is the son of legendary Malian guitar player Ali Farka Toure, who died in 2006.

Fresh off opening the World Cup and bringing down houses on 4 continents last year, Vieux Farka Touré is poised to become Africa’s preeminent axe-man. Vieux Farka Touré’s career in music would never have happened if his illustrious parent, African blues legend Ali Farka Touré, had his way. Ali felt that the music business was a harsh place to work and preferred that Vieux enlist in the army. But young Vieux, destined for the stage, honed his skills on the guitar in secret and eventually found a mentor in Toumani Diabate, and his own talents eventually convinced the elder Farka Touré that a second generation of music prowess was inevitable.

This is music from a contemporary Africa – urban, sophisticated, globally connected but deeply proud of its ancient heritage. This is the old/new Africa that Vieux represents. Vieux’s is the music of an Africa that rocks, and yet still hears the camel’stread in the sand. It is this unique combination of stunning guitar virtuosity and North Malian traditional roots that have prompted many critics and fans alike to dub Vieux “The Hendrix of the Sahara”.

“Vieux Farka Touré has really found his place with the legacy of his father as a dynamic figure in contemporary African music.” ****Evening Standard

“He can hold his own with any of the guitar greats, from any era.”
-All Music Guide